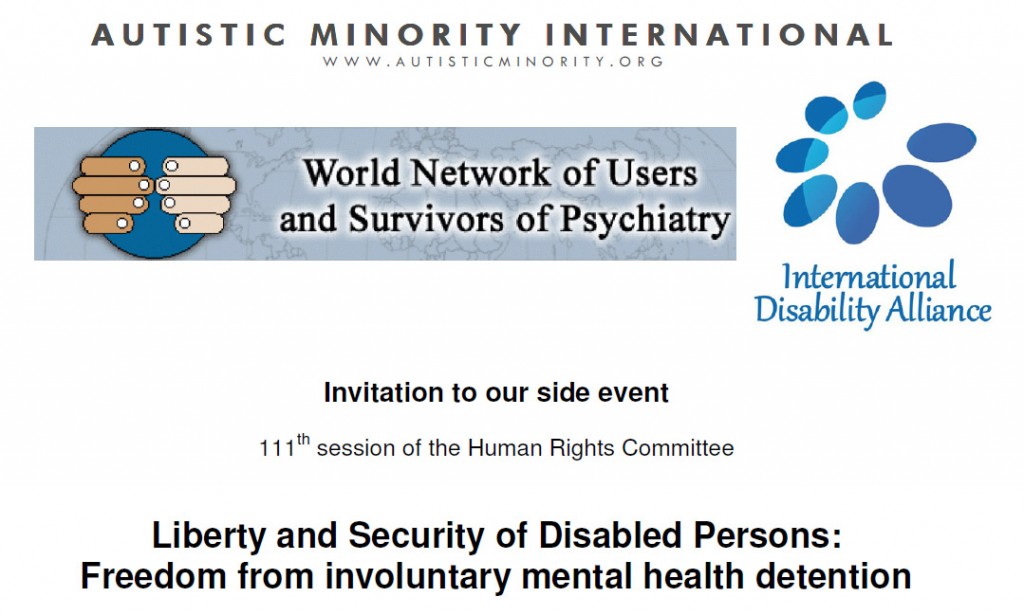 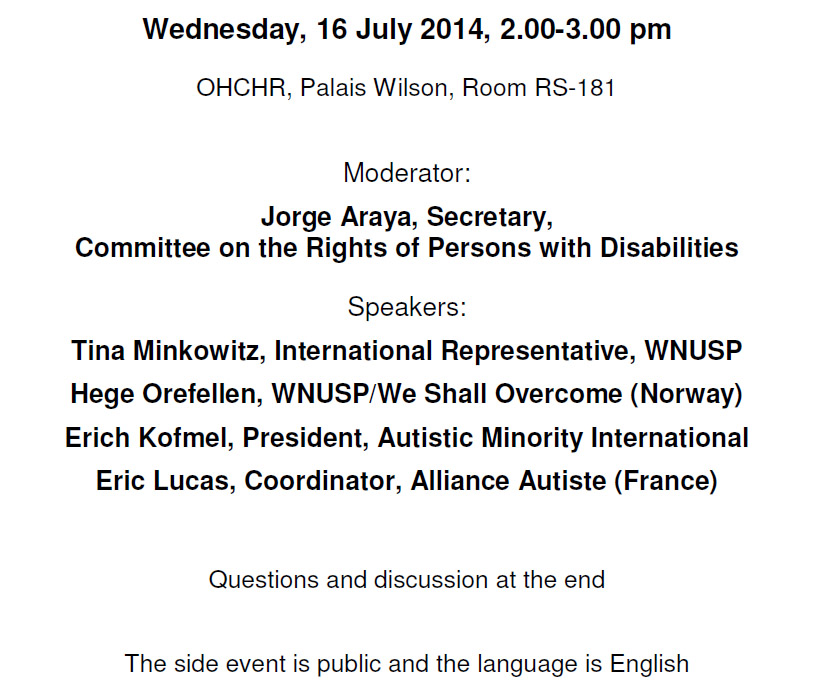 It’s not easy for me to speak like this in public, because I’m autistic. I was diagnosed with Asperger’s syndrome. But I agreed to give my testimony today at the United Nations because of the way mental health laws are applied in France.

Twenty years ago, I went to a psychiatric hospital and asked for help because I was despaired, because of problems with society that made my life almost impossible. But the doctors apparently did not understand me (or believe me) and they rejected me. They even used the police to take me away from the hospital. Then, because of the suffering and injustice, I started to be slightly violent, shouting and crying, and finally the same hospital, after a decision taken within a few minutes, decided to detain me there, and this lasted for one year and 3 months!

I had no way to defend myself, no clue about how long it would take, no justifications, no hope, nothing, although I was asking for that all the time. Even my family or anyone would not have had the right to take me away from this nightmare.

Not knowing for how long you will be institutionalized is really awful, especially for an autistic person. Two or three doctors who are colleagues decide what they want, according to their fears, beliefs or whatever. You can’t keep your dignity, your pride.

Even if someone is imprisoned for a crime, they can still think and believe in who they are – but not in those hospitals where you have to regress to the state of a little child until you believe that they are right, to restart from scratch (as they expect), where you have the right to nothing, nothing not decided or approved by the doctors, where your very own, deep personality is negated, erased!

They could not completely erase me, format me: they just believed that they did.

It took about 10 years for me to manage to « unformat » myself, to retrieve who I am.

But many people are not as lucky as me, and they are still wasting their life between walls of concrete.

I can remember a young guy, very kind, who was there with me. I still hear him, almost crying « Eric, I’ve been here since 4 years. I’m so fed up with the public psychiatry. I would like to go out, so much ». Fifteen years later, I learnt that he still lives in an institution!

Who can do something against the incredible power of these doctors?

They decide for you what is good and what is not. They tell you if you are suffering or not, if your ideas are delirious or not, etc. You have to take their pills, they put needles in your body and inject you things that you don’t know …

You have the freedom to do what they accept, like reading books, or walking in the corridors, or sleeping (but not too much)…

No liberty, no projects, no love, nothing. Just waiting. Is that a life?

I remember watching the cats outside, through the windows, and thinking how lucky they were.

I was asking for freedom, to be released, I was even begging, but they did not bother.

Although I was always quiet during those fifteen months, as they recorded.

They also wrote several times that they could not understand me!

Only last year was I diagnosed with Asperger’s syndrome, after discovering it by myself.

Hence, these doctors, who had the right to take my liberty because they were supposed to know their job so well, were not even able to see that I was autistic.

The doctors finally accepted to give some consideration to me, only when I understood that I had to agree with them, to think like them, which I did.

I had to « simulate a successful slow brainwash », to escape this ordeal.

I’ve heard that nowadays the situation has improved a little bit, with the right to a lawyer, but it seems that it’s very superficial, and even the lawyers themselves are complaining.

The worst of all is that I know that such a nightmare can happen to me again. In fact, in France it can happen very easily. I narrowly escaped it this winter.

Sometimes, I still have nightmares during my sleep, about these people coming and taking me, ruining my life.

Society constantly organizes itself by conditioning and formatting everything and everyone. Therefore, you have to be « normal ». Be normal, or suffer. This is the unwritten social rule.

It is not very difficult for non-autistic persons to be normal, but it is highly difficult for us autistics, and only a small part of us is able to play that role, which is imposed on us.

Now I realize that many of the other people kept with me in that hospital were probably autistic too, and not dangerous at all. They were like me, kind, and with their own « personal world ». The hospital was there just to keep us from society, which does not understand us.

When I think back to my co-detainees, over fifteen months I did not notice any change, any improvement, even the slightest. How can you improve, and learn life, when life is a hospital, always the same walls and corridors and persons? When other patients barely talk and the medical staff has rights that you don’t have? When they show no empathy or compassion, which was the only thing I needed and could not find in society?

Today, I know the problems of autistics in France, and I know that I was right in my feelings. Autistics are excluded like unwanted beings, parked or warehoused, and they are « raw material » for the medical industry, at least to some extent. That’s why it is so difficult to defend ourselves against this lobby. Society does not care, because we are only one percent.

And also they know that autistics are intelligent, that we may show that « the king is naked » – another reason to keep us as far away as possible, to treat us like « madmen » or « dangerous ».

No one wants to understand that all this was total abuse. During twenty years, I’ve never been able to find any real assistance to defend myself. Until today, I write letters in vain. I had a lawyer in 2000, and she said that it’s impossible to do anything. She said that it’s not possible to go back in time to search for facts and details.

For instance, when the law requires a « detailed medical certificate », doctors are in the clear when they write « he was aggressive », when in fact I was highly irritated (which is different, and legitimate in such an unjust situation), and they don’t mention any detail !

When they write « he had barricaded himself in the waiting room », it seems impressive, but in fact I had just put my suitcase against the glass door, because I needed to be alone, and it was still easy to push the door. But they see only what they want to see.

I’ve created an organization called « Alliance Autiste », in an attempt to help and defend ourselves, for instance by creating special places for autistics caught in a social distress crisis, in order to avoid such nightmares like mine. Needless to say that we do not receive any support from the state nor anyone else.

There are millions of autistics in the world, needing help, needing compassion. Not deprivation of liberty. Needing a real life. A free life, like you. And me now.

Can the Human Rights Committee help?

Thank you very much for your attention. 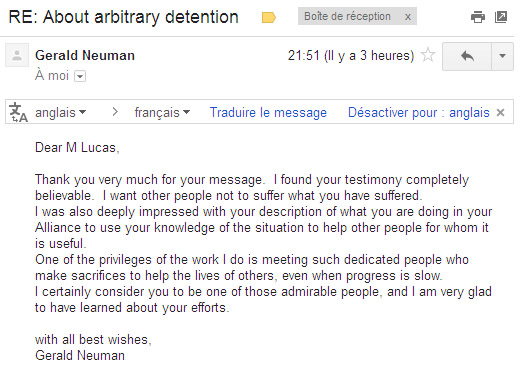 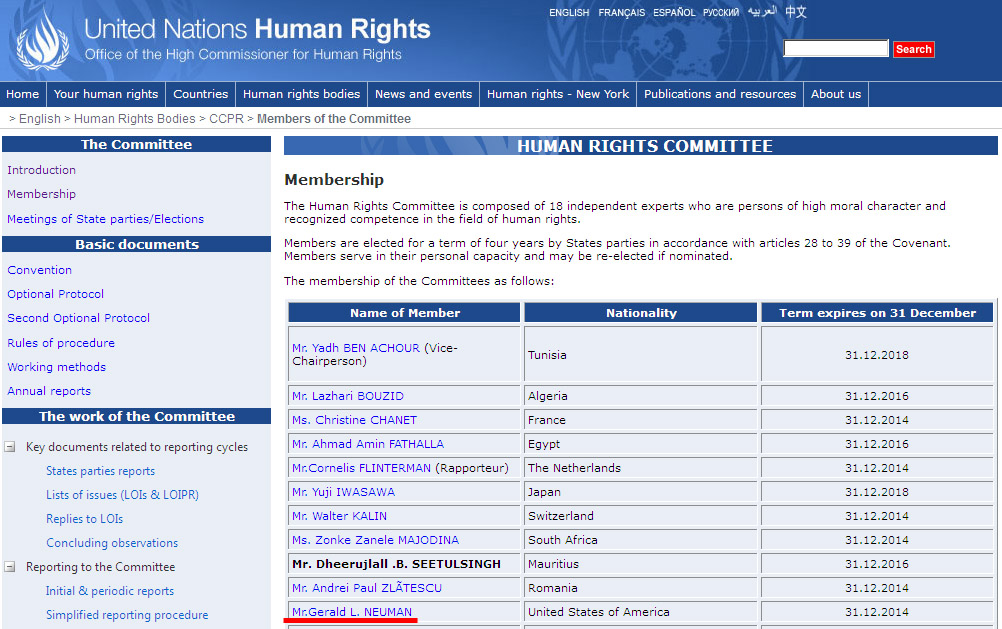 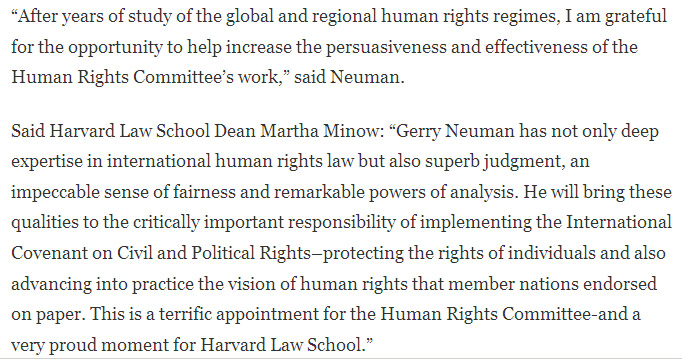